The hazards of dolphin begging

The hazards of dolphin begging 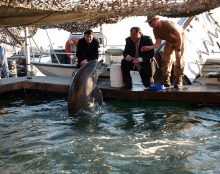 Dolphins are fascinating creatures to many people because of their intelligence and interesting personalities.  The chance to interact with a dolphin is a wonderful experience that most people never have.  Often the mammals will follow boats around or put on performances of sorts for people, craving attention.  The other thing they hope to gain from being so personable, however, is a free meal.

Dolphin begging is on the rise, and while it would see a great opportunity to many people to be able to hang out with these creatures and feed them, there are actually many problems associated with interacting with them in this way.

When they become accustomed to hanging out near boats, there is a greater risk of them being injured.  They may also end up getting entangled in nets.  Sometimes they’ll eat something dangerous, such as when they try to steal fish from a line.  There is also risk of dangerous bacteria from improperly handled fish or sickness if they eat the wrong things.  People have, unfortunately, been observed feeding dolphins everything from hot dogs to beer and pastries - not exactly healthy meals for these mammals.

Furthermore, the dolphins learn quickly when and where they can get a free meal.  As soon as a human feeds one, it remembers and will begin to use begging as a survival tactic.  They pass this behavior on to other dolphins, both their friends and their calves.  The numbers of begging dolphins only rises as the trend spreads socially among them.  Luckily, it has so far been observed that if the feeding is stopped they will go back to their regular hunting habits, so there is little fear that they will become completely dependent upon humans.

Though there are many laws in place to make the feeding of dolphins illegal, people are either ignorant of them or simply ignore them.  It’s hard to enforce such laws and when officials leave an area, the pattern of dolphin feeding returns.  In same cases, dolphin beggars have been known to practice their trade for more than 20 years.

While these mammals may be great to interact with, people little realize the dangers that they are creating by even such a simple act as keeping a dolphin well-fed.  Unless people are better educated on the subject, this may become yet one more problem in maintaining dolphin populations for the future.


Dolphins demonstrate grieving and may have an awareness of death


Dolphin speech: What do we know?