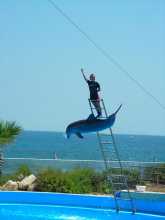 In an effort to increase tourism in India, the city of Mumbai is looking at building its own Sea World park, complete with dolphin shows.  The park is part of a larger plan to develop the Konkan coastline and turn it into a major tourist destination.  Its design will be based on that of the park in Orlando, Florida and aside from the dolphins there are plans for a golf course, convention center, theater, educational facilities and all the other tourist conveniences that one might expect to see in a park of this kind.

Currently, the government is working on buying up the acquired land, though most of what they wish to use is already owned by the state.  Project and funding reports pending, the construction of the park is expected to start soon.

The question of whether it is morally right to be building such a park is one that People for the Ethical Treatment of Animals (PETA) are attempting to bring to light.  Studies have shown that dolphins’ quality of life suffers when they are placed in captivity.  This results in emotional states that are best described as depressed or stressed due to their limited living environment.  Captive dolphins also only live approximately one-half the life-span that they do when in the wild.

Several other countries, including Brazil and Costa Rica, have already passed laws which make it 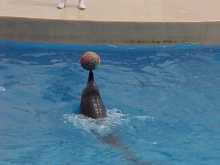 illegal to use marine mammals as forms of entertainment and PETA is hoping that others will follow this example.  Unfortunately, the battle here is one between economics and the rights of dolphins and other sea life, and in these cases economics generally wins out.

It is difficult to justify placing dolphins in captivity simply for the sake of keeping tourists entertained, though if regular people would stop frequenting these types of establishments then governments would be more prone to step in and set up proper protections.  As the second-most intelligent species on the Earth, dolphins deserve better than to be locked in small aquariums and brought out only when they’re needed to make some business owner money.  Let’s hope that people learn to recognize this and that dolphins will be treated with greater respect in the future.


Maui’s Dolphin – The Rarest Dolphin Species in the World