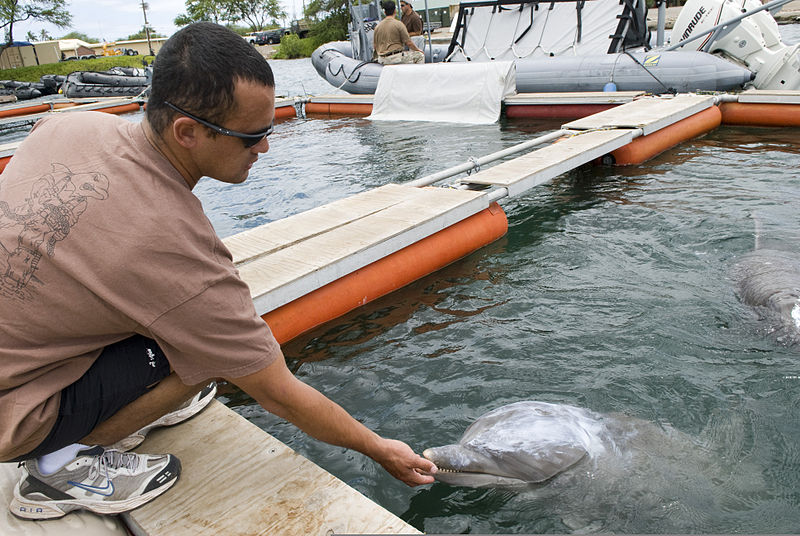 How long will it be before dolphins end up doing our killing for us?

For many years now, dolphins have been subject to the human condition of war.  The militaries of various countries have seen fit to try to train dolphins to perform several tasks, from attacking enemy divers to planting mines on ships.  Each group has had their own programs, though thankfully most of these never quite panned out.

The latest use of dolphins in the military is at least a little less combative.  The U.S. Navy has been training these creatures to use their sonar in order to hunt through sometimes rubble-heavy coastline areas and find underwater mines.  The newest operation is called Dolphin 2012 and it was performed along the Montenegrin coast using six bottlenose dolphins.

Though the use of dolphins for such purposes may seem controversial, danger to these underwater operatives is minimal.  While they may swim around and locate the mines, it’s the U.S. Navy divers who actually have to go in and disarm or dispose of them.  Their tasks have been compared to that of drug-sniffing dogs, merely acting as support because of their superior sensory abilities.

But while this cooperation between man and dolphin is helpful, the potential for abuse is always there.  The more we learn about them, the more likely it is that those mining and attack programs will see further development as people discover how to make the dolphins effective at such tasks.  The Ukraine, for example, is rumored to be arming dolphins with knifes and guns so that they can attack enemies underwater.  The threat of dolphin combat has become so real that some navies have programs to train their divers to fight against dolphins, just in case.

It’s still a complex process to get dolphins to be able to discern friend from foe, be it a person or a ship, so they may not be getting drafted anytime soon.  But when we finally do figure out how to do it, will even the protests of protection groups be able to stop it?  Or will these relatively peaceful creatures end up as yet one more weapon in humanity’s seemingly endless desire for war?


Dolphins under attack off the Gulf Coast


Dolphin brains made to keep going