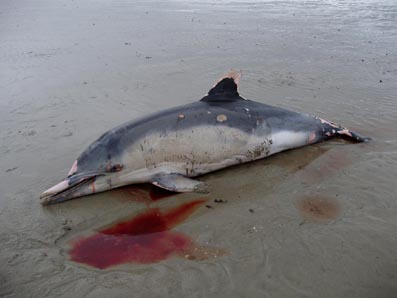 A few weeks back, I posted about a dolphin that had been found in the United States southeast, victim of a deliberate shooting attack.  Now, it appears as if that trend is continuing, with more bodies being found in the region of the Gulf Coast.  One was found in Mississippi, part of its jaw missing.

Another was found in Alabama with its tail cut off.  One was the victim of a screwdriver being plunged into its head and five more were found shot to death.  Several others have been found with missing fins or other injuries.  Attacks against dolphins are on the rise, though no one seems to know for sure exactly who is doing it or why.

In order to hunt down and prosecute the killers, police are examining evidence such as the bullet casings they found near the scene.  There is also a $5000 reward being offered for information leading to the arrest of those responsible.  The National Oceanic and Atmospheric Administration (NOAA) is putting more people on watch and paying extra attention to cases of injured dolphins.  There is also a private reward being offered by one of the stars of the Whale Wars television show to the tune of $20,000.

The chief suspects in these attacks are fishermen who see dolphins as competition, though whether it’s just one angry individual or an organized group is as of yet unknown.  Those investigating feel that the likelihood of a group is fairly low, given that the incidents are spread out over a large area and appear to be unrelated for the most part.

Added to the damage done by the BP oil spill, approximately 700 dolphins have been found dead since early 2010.  How people can look at these intelligent creatures as expendable is beyond me.  Hopefully, NOAA and the rest of those looking for the offenders will be successful and an example can be made of these people so that such rashes of attacks will not repeat themselves.  If we’re going to understand dolphins and keep their populations from dwindling, more people need to take these things seriously and work together to keep them from becoming the victims of unthinking individuals.