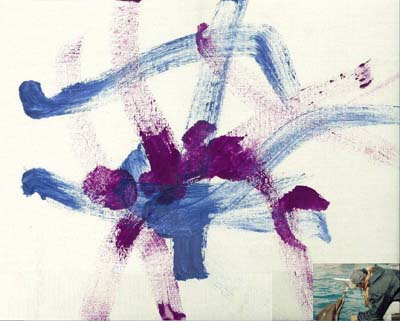 For the low price of $200, you can have a dolphin paint a picture for you.

We all know about the fact that dolphins (like many other animals) get rounded up and put on display in tanks for the pleasure of man.  Now, we’re taking it a step further, with cheaply produced, dolphin sweatshop artworks!  OK, so maybe I’m blowing it a bit out of proportion, but the truth is that five dolphins at the The Mirage Secret Garden and Dolphin Habitat have indeed been taught to paint and will paint you up a picture if you’re willing to pay.

Though it may really just be another way to exploit these poor creatures, I do still have to marvel at the idea of dolphins independently creating art.  So far they’ve only had three colors to work with and can’t do much in the way of a great portrait, but the very idea of creativity is a cultural element not seen in the vast majority of life on Earth.  It could be that they’re really just mimicking what they’ve been taught and have no idea of the implications of their actions, or it could actually be a sign that this artistic cultural element is present within dolphins’ brains.  According to their trainers, it didn’t take long for the dolphins to master the basics and they’re looking forward to seeing if the creatures can adapt more advanced techniques in the future.

But if you want to have a dolphin paint a picture for you, it isn’t cheap.  The habitat is charging just under $200 for the chance to hold your canvas while the dolphins make a three color mess of it.  The paintings may not be masterpieces, but it’s still a pretty interesting and unique souvenir to take home.  Or, if you want to save some money and don’t mind not being able to hang out with the dolphins while they make the work, you can buy much cheaper dolphin-made artworks in the gift shop.


Dolphin Stops By Divers for Some Help