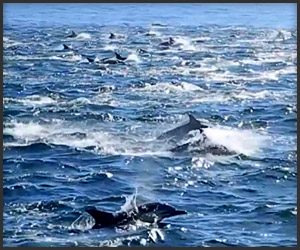 California whale spotters treated to a rare gathering of dolphins

This is something that I’d never heard of until it started making waves (badda-bing) on the news lately - the rare and apparently breathtaking occurrence of dolphin stampedes.  For some strange reason, hundreds of dolphins all get together at once and go rushing across the water, almost as if they were in some sort of great race.  And while people are still at a loss to figure out exactly why this happens, at least now we have a video online so that those who didn’t have the luck to be there can still take a look at this amazing event.

It’s estimated that around a thousand dolphins took part in the great show off the coast of Dana Point in California.  This area is known for its large dolphin population with an estimated 450,000 living in the region.  But the dolphin stampede wasn’t just a singular occurrence.  On both Saturday and Sunday the same thing took place, which is pretty remarkable considering how rare it is to see just one of these.

The video of the dolphin stampede went viral, of course, racking up more than 1.6 million views in little under a week.  Better yet, the interest shown in the video has extended to other areas.  There is more talk about the populations of these mammals in the California area, including people speaking about the dangers that dolphins are dealing with today.  So while it may be amazing to look at, the end result provides us with more than just a bit of entertainment.

If only other endangered creatures would be so accommodating as to put on these grand performances, we wouldn’t have such a hard time protecting them from our fellow man.

And in case you haven’t had a chance to see the video, here it is:


Dolphin Stops By Divers for Some Help