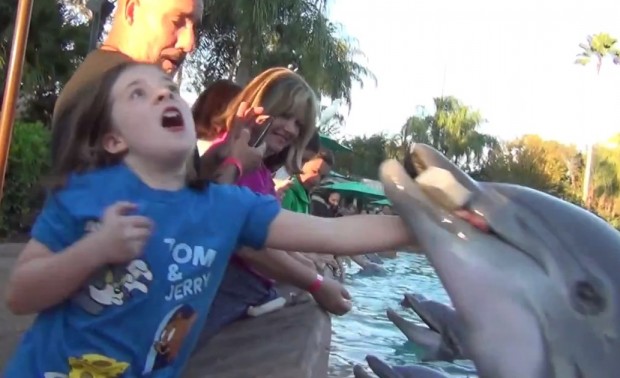 A girl gets nipped at Sea World and suddenly everyone is interested in dolphins.

Sometimes something pops up in my news feed that really brings out the worst in me.  There are so many things that should be making the news that don’t, but as soon as something ridiculous happens, everyone eats it up because it brings in more people to read.

The piece I’m referring to involves a little girl who got bit (barely at that) on the hand while feeding a dolphin at Sea World.  This small act of nature caused so much of a ruckus that the girl and her family even ended up making the rounds through television news sources, including Good Morning America.  So why, exactly, does such a small event provoke such a reaction?

When people go to someplace like Sea World, to play with the captive dolphins and feed them, they somehow expect that these dolphins (and all the other sea life that have been caged there) have been magically transformed into domesticated animals.

So when the creatures act out a bit of their true nature, such as munching on a girl’s hand because they think it’s food, everyone gets alarmed.  Are their children safe?  How could the park let something horrible like this happen?  Will the dolphins start tearing throats out next?  Perhaps they will build a weapon of mass destruction and hold the world hostage?

The amusing thing is, as the girl made the press rounds, she expressed little concern over what had happened to her.  Everyone aside from the one bitten was more distressed than she was.  The parents put the video they took that had the girl being bitten and posted it on the Internet, so that other parents would realize the “dangers” of feeding dolphins at Sea World.  Others accused the park of “trivializing” the situation.

And where threats of lawsuit loom, so do overreactions from the park.  Sea World has issued all sorts of official press statements telling everyone exactly how much this concerns them and detailing how seriously they’re taking the situation.  They’re putting on a grand show, despite the fact that they know (being trained in how dolphins actually function) a bite here and there is inevitable.

It only stands to reason that if you keep a wild creature in captivity, you’ll have to endure a few consequences of it not being human.  Actually, humans tend to produce more grief than dolphins ever will, so I don’t see what the big deal is.  If you don’t want little girls to get bit, then don’t keep the dolphins in cages and use them as an attraction.  If you want to write a news piece about dolphins, pick a subject that is important, not this side-show event.


Dolphins under attack off the Gulf Coast